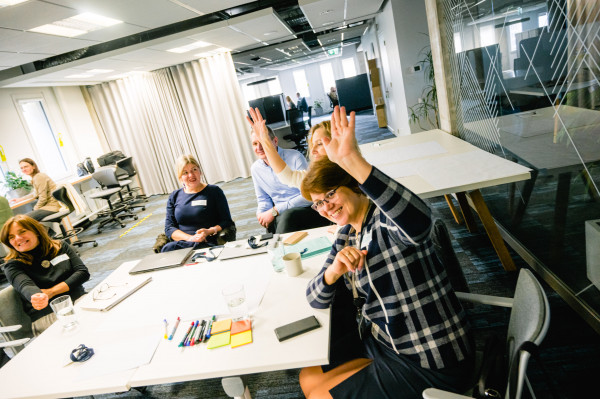 Sprint or co-working sessions are organised so the public administration can successfully implement the development of a modern work culture in accordance with the guidelines for the establishment of the Public Sector Office developed by SRE and the Future Office concept developed by VK Innovation Laboratory. Together, a model of regional co-working spaces for buildings owned by the state and municipalities was developed in accordance with the needs, and a prototype of the working environment of Daugavpils state administrative institutions was created. The involved experts will jointly address practical issues regarding the provision of premises, the necessary IT infrastructure, work organisation and security, as well as the necessary funding for project implementation. After development of the prototypes, the possibilities of localisation in other regions of Latvia will be tested and the conclusions will be summarised in the deliverable, which will form the basis for further steps for the introduction of a smart work environment in the public sector.

“This is a targeted step towards introduction of co-working spaces in the public sector and a continuation of the co-working pilot project of public institutions organised by SRE this year, in which we hosted more than 400 public sector colleagues in the SRE activity-based office. The great interest indicated that the public sector feels a clear need for a smart work environment not only in Riga, but also in the regions. The country's future labour force, productivity and achievement of goals are closely related to the well-being of employees, which is significantly influenced by the work environment. At the moment it is especially important that modern offices contribute to efficient use of premises and resources, allowing savings in the state budget,” comments A. Vārna.

During the co-working pilot project of the state administration from May to July of this year, the SRE activity-based office at 1 Talejas Street provided support to public institutions, including state capital companies which have started the process of changing the working environment or are still planning to do so. Nearly 400 employees from 33 public sector institutions took part in the project to get to know the advantages of a modern work environment in practice, while SRE identified the demand for co-working offices and the range of information technologies, the most important aspects in order to promote the introduction of offices that meet modern requirements in the state administration. The project participants appreciated the different work zones for convenient performance of individual and team work duties, as well as IT technologies that provide secure and flexible access to systems for team members working in a hybrid model.

SRE is the first successful example of an institution’s work being more productive and effective in an activity-based office, after making a move from three buildings to one at the end of 2019. First of all, it leads to savings in the state budget, and also has positive effects on the climate by reducing the total area used in the office by 45%, the number of work stations by 30%, and by saving 900 thousand euro on maintaining facilities over 5 years. Already today, the total reduction in consumption of thermal energy and electricity is 65%. Second of all, the change in the working environment has a direct impact on the well-being of the employees, as well as the attraction indicator that reached 75 index points last year and is well above the average in the public sector. The design for an activity-based office helps with integration in the team as well as improves the exchange of information and co-operation between the structural units.

SJSC “State Real Estate” provides professional real estate management and administration for approximately 365 real estate properties consisting of 1100 buildings with a total floor area of 0.95 million square metres, along with land beneath the buildings covering 602 hectares and more than 3536 land properties with an area of 903 hectares. SRE is one of 23 Latvian companies that has received the highest platinum award as part of the Sustainability Index of the Institute of Corporate Responsibility and Sustainability, confirming the good governance and sustainability of its operations. The company was founded in 1996 and is 100% owned by the Ministry of Finance of the Republic of Latvia.